Théâtre du Vieux-Colombier, which became the second theatre of world-famous Comédie Française in 1993, just underwent an in-depth overhaul of its scenographic infrastructure, with a completely redesigned sound system implemented by Amadeus, and built around the HOLOPHONIX spatialization processor.

Built in the heart of the Saint-Germain-des-Prés Parisian district, the Théâtre du Vieux-Colombier hosts at least four creations each season involving classical or contemporary texts, presented in a series from September to the beginning of July.

In 1993 the Théâtre du Vieux-Colombier became the second theatre for the Comédie Française. Originally created in 1913 by Jacques Copeau, this major French cultural institution was founded in 1680 and has been hosted since 1799 in the Palais-Royal’s Salle Richelieu (Paris’ 1st arrondissement). The Théâtre du Vieux-Colombier was created according to a ‘drama renovation’ concept, as opposed to the commercial activity of the ‘Grand Boulevard’ theatres on Right Bank of the Seine.

In recent months, the Théâtre du Vieux-Colombier underwent an in-depth renovation of its stage infrastructure – mainly flies, scenic networks, etc. The electro-acoustical system was also completely redesigned too, in close collaboration with the theater’s technical manager Philippe Lagrue, along with Dominique Bataille, a multidisciplinary creator, sound engineer, and composer, who has worked over the few last years at the Théâtre du Vieux-Colombier.

Dominique Bataille worked in the Grande Halle de la Villette during the 1990s then collaborated with Patrice Chéreau and Jean-Pierre Vincent in the Théâtre Nanterre-Amandiers. Starting in 2009 he began to compose music for the Comédie Française, and he works in parallel with composers Pascal Dusapin, James Dillon, Wolfgang Mitterer, and Oscar Bianchi.

Dominique Bataille was one of the first users, operators, and beta-testers of the HOLOPHONIX processor. He was deeply involved in the development, mainly to define the main features that were essential to theatrical creation, and their ergonomics.

The main sound system is designed according to a semi-spherical concept to get the best envelopment for spectators and adapted to the geometrical shape of the hall — a parallelepiped — and the technical and aesthetic constraints imposed by the hall. The system comprises 23 speakers made by Amadeus plus the HOLOPHONIX spatial sound processor.

Ten Amadeus PMX 8 MKII speakers – five on each side along the whole theater floors’ depth – were seamlessly integrated into lateral ‘arches’ of the wooden frame evoking a boat’s overturned hull. They are supplemented by eight Amadeus PMX 5 MKIV speakers that are integrated into the upper ‘arches’ in zenithal position.

The L/C/R front system is made of three new triaxial Amadeus C15 speakers, co-developed with the Théâtre National de Chaillot. The sub-bass reinforcement system is built around two slim ABB 15 speakers, which were initially developed for the Théâtre des Abbesses (hence the ABB acronym).

Around twenty Amadeus MPB 200 B speakers – in place since the previous redesign in 1993 – are sometimes used as a punctual sound source, onstage, in the flies or under the stage, according to projects and creations, enabling spatial illusions we love to imagine and to offer to the theatre audience. The speakers are actually declared as bus ‘virtual outputs’ and processed by the HOLOPHONIX processor using various spatialization techniques, Dominique Bataille explains.

Over three years ago, Christian Hecq and Valérie Lesort had taken up the challenge to create Vingt Mille Lieues Sous les Mers (“Twenty Thousand Leagues Under The Sea”), an ‘all-audience’ spectacle involving actors and puppets. This show was nominated four times at the 26th Molières Award ceremony, and won a Molière Award for ‘Best Visual Creation’. After a French tour last year, the show came back on the stage it was premiered on, the Théâtre du Vieux-Colombier, from November 7th, 2018 to January 6th, 2019, adds Bataille, the composer of the almost 90-minute long sound creation underlining the theater spectacle.

As the show returned to the Vieux-Colombier in 2018, we were able to re-work the original sound creation – originally completed with traditional techniques – adding elements and magnifying it with new ‘object-oriented’ mixing and spatialization tools now available in the Théâtre du Vieux-Colombier. The various poly-algorithmic spatialization techniques available in the HOLOPHONIX processor open an almost limitless creative field. We could thus make our own Ambisonic recordings and present them through HOLOPHONIX without any decoding, move several hundred sound elements in 2D or 3D, create an intriguing or oppressive sound space, a genuine trip to the deepest abyss, thanks to the included reverb settings, concludes Bataille. 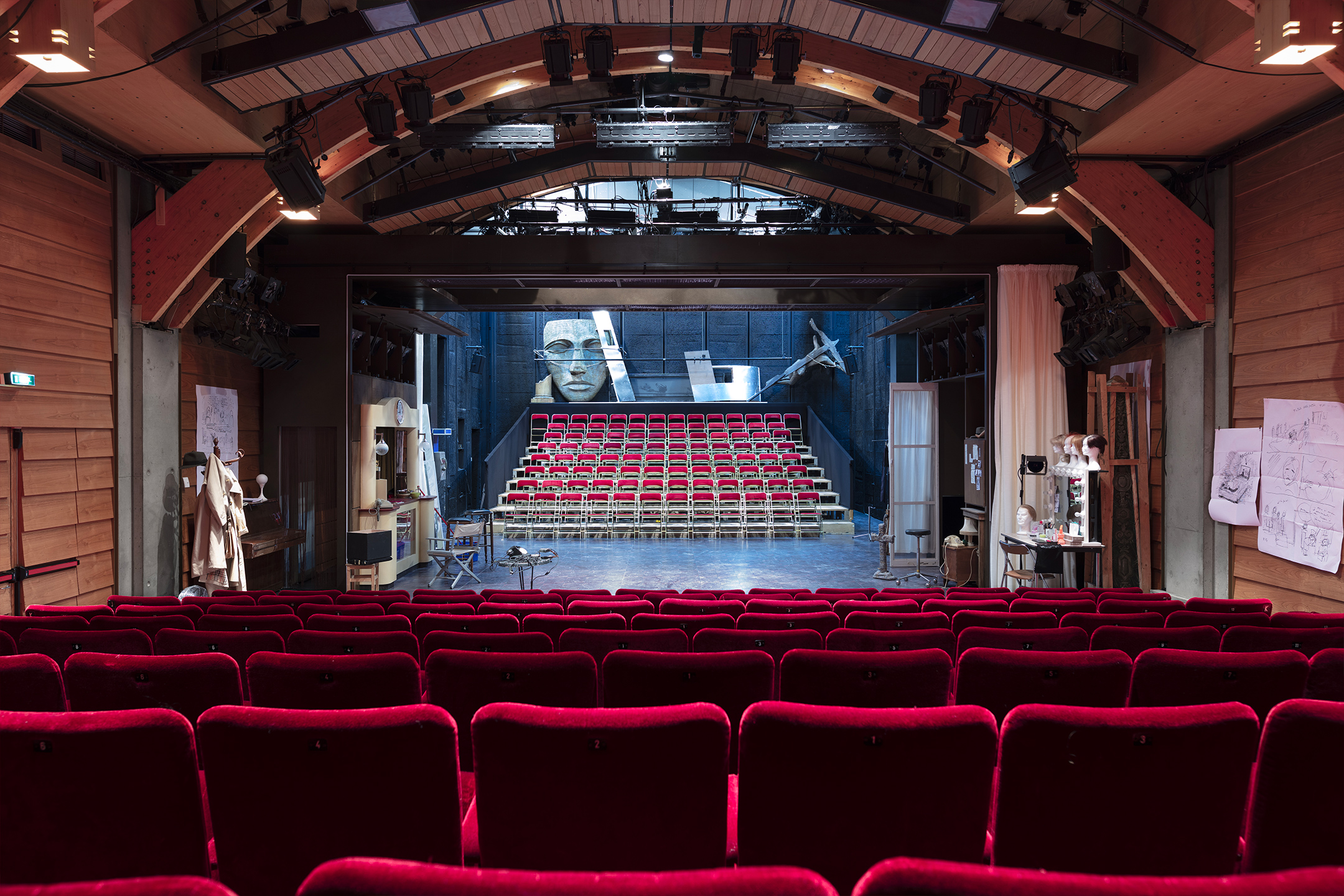