Amadeus has announced the install of over 172 of their speakers along with the company’s HOLOPHONIX immersive audio processor at the newly opened, and completely remodeled 560-seat theater, La Scala Paris. Amadeus was deeply involved throughout the renovation process helping to design the sound reinforcement system that would allow the theater’s productions a boundless array of audio control and choices, all with the very highest audiophile-level sound quality.

The electro-acoustic sound reinforcement system was designed specifically for La Scala Paris by Amadeus – in collaboration with composer Philippe Manoury and scenographers Patrice Buniazet and Richard Peduzzi. The result is an outstanding sound system with modularity that enables an almost limitless number of configurations and possibilities for all types of performers and theatrical presentations.

Gaetan Byk, Marketing Manager at Amadeus states, La Scala Paris has been thought of as a fundamentally different type of theater, because of its programming, its artistic expression, its technical scenography, and the associated technologies that bring productions to life. The sound was an essential piece of the renovation, on the purely acoustic, mechanical, and electro-acoustical diffusion levels.

The HOLOPHONIX processor creates an extremely advanced platform, which is able to mix, reverberate and spatialize sound content played from various devices using several different spatialization techniques in two or three dimensions. It allows users to select and combine these techniques (or algorithms) in real time.

The sound and acoustics-related choices made for La Scala by the owners Mélanie and Frédéric Biessy were decided upon after they met with artists like Philippe Manoury, Philippe Hersant, and Philippe Schoeller. We wanted to build a system that would be able to adapt to any live show and any concert – even the most acoustically and sonically challenging. Our meetings and exchanges with IRCAM were also a key factor in transforming La Scala into a facility with unique acoustical specifications. The hall’s acoustics and sound reinforcement system are at the core of our project, and it makes La Scala even more than a concert hall, states Biessy.

To bet on the success of a multidisciplinary performance space implies that, in every domain, the tools are the most demanding and the most adapted to the quality and the demands by the artists invited to perform there. All the artists who have performed at La Scala in the past four months have confirmed that their needs were met, concludes Biessy.

Spread around in a hemisphere shape, enveloping the viewers and adapting to the geometrically shaped building – all while controlling the technical and aesthetical constraints in the Grande Salle, the new sound reinforcement system at La Scala Paris uses 172 speakers designed and built by Amadeus at their Paris headquarters. The audio setup has been largely inspired in its philosophy by the system installed within IRCAM’s variable acoustics hall (called Espace de Projection) for research on high-end sound field recreation systems, including Wave Field Synthesis 2D and Ambisonics 3D sound. This IRCAM space features nearly 339 speakers designed and manufactured by Amadeus from 2008 to 2012.

Some speakers - especially those fixed on the two upper catwalks - were designed specifically by Amadeus for the La Scala Theater. The speakers installed on the first catwalk are set at 6.5m height from ground, with the front panel slanted, while the coaxial transducer is aimed naturally at a 30 degree angle to get an optimal overlap in the listening area sweet-spot; On the second catwalk, the front panel of the speakers are tilted at 45 degrees. Three speaker ‘antenna’ systems are fixed under every balcony as delayed systems. Each ‘antenna system’ is made of 12 Amadeus ‘PMX 4’ coaxial speakers, evenly distributed over the whole width, with an inter-source distance of 1.25m. A frontal high power line array system is also part of the global system. It is made of 18 Amadeus ‘DIVA M²’ (pronounced M-Squared) speakers, a new model in the Amadeus product range. Several speaker configurations are used at La Scala: the main L/R is made of 2x9 DIVA M², the L/C/R is a 3x6 DIVA M² setup, and a multi-diffusion setup consists of a 6x3 DIVA M².

Depending on the project being presented at the theater, speakers can be discretely added: they are managed by an Angular 2D or k-Nearest Neighbor spatializer, or directly routed to a physical source through the HOLOPHONIX processor system.

Renowned scenographer, painter, designer, and furniture creator Richard Peduzzi designed the whole interior architecture, from the ‘Scala Blue’ (created by Argile) to the Grande Salle furniture, lighting, boxes, stairs, rails, railings, and passageways. Peduzzi, along with Amadeus and Argile, worked together to manufacture all the installed speakers (except for the mobile items) in a special ‘Bleu Scala’ finish; a subtle blend of resins and blue-grey pigments, which makes the speakers appear both dark and bright at the same time. 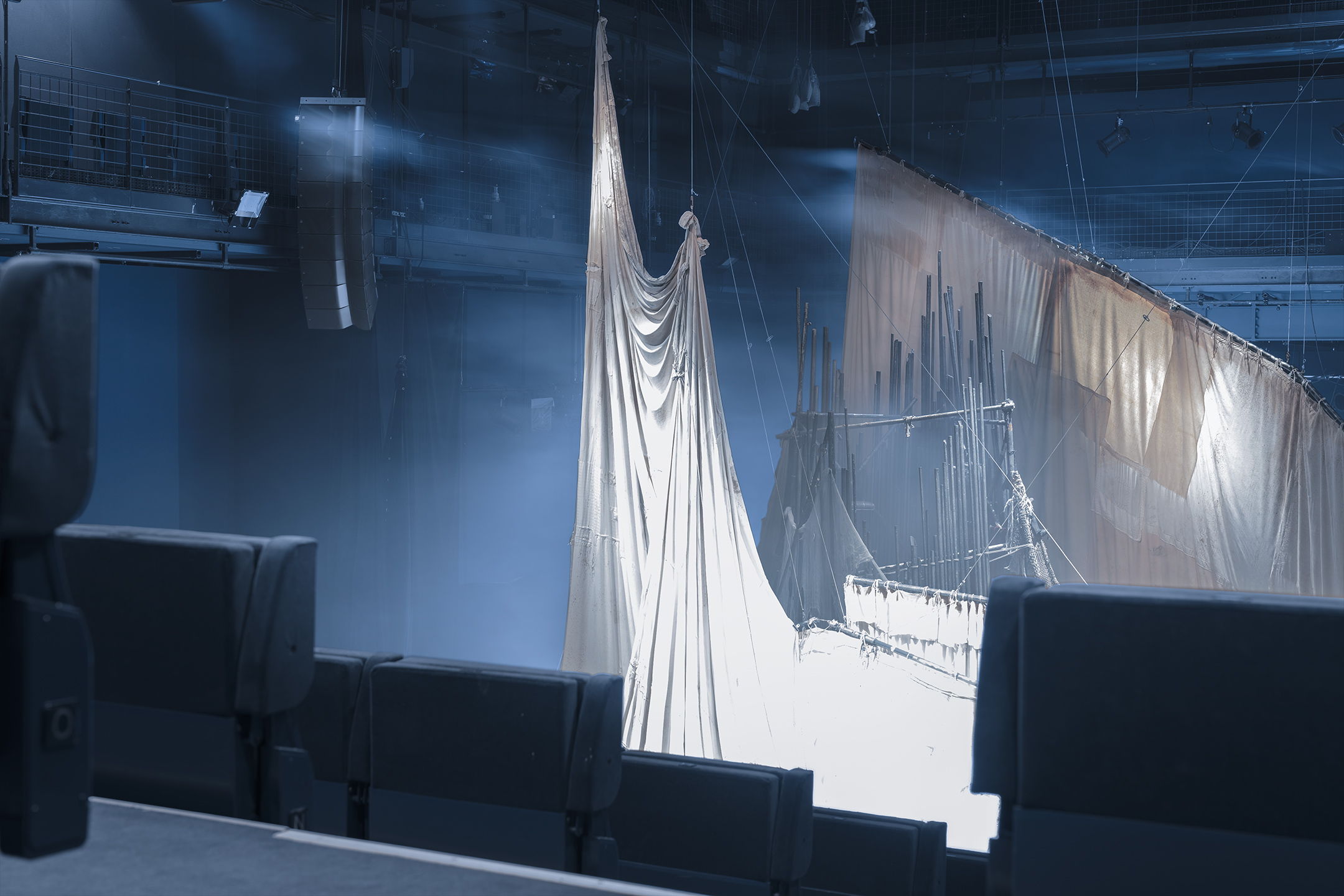