The House of Krug has taken another step in creating new and immersive tasting experiences for its guests by collaborating with France’s IRCAM Institute, Amadeus, and the renowned international architecture and interior design agency AW2 to create a new ‘Audio Tasting Room’ at the Krug Family House in Reims, France.

Since 1843, the House of Krug has explored new ways to enrich the tasting experience. While Music has always been at its heart, the current endeavor was spurred by recent research further affirming the impact of hearing on taste, including the work carried out by Charles Spence and Janice Qian Wang of Oxford University's Cross-modal Research Laboratory. This led the House to push the boundaries of immersive tastings through its collaboration with the IRCAM.

To envelop guests into the Maison expertise in the art of blending, the Krug team – including former Krug Cellar Master and Deputy Director Éric Lebel and Alice Tétienne, a member of the winemaking team – challenged the IRCAM researchers to use the powers of sound to convey the unique profiles of the different base wines that compose Krug Grande Cuvée. It is through daily tastings of these still wines that the Krug Tasting Committee can make decisions about the final blend but this process does not lend itself to a tasting with guests as it can be quite technical.

The question was: How can one translate the base wine tasting experience in a universal language ?

At the STMS (Sciences et Technologies de la Musique et du Son), a laboratory founded in 1995 and hosted at the IRCAM campus in Paris, the association of CNRS, Sorbonne Université, Ministère de la Culture, and Institut de Recherche et Coordination Acoustique/Musique – Including teams from the Perception and Sound Design Department, as well as Acoustic and Cognitive Spaces Dept – worked together on the project to bring sound into the process of tasting Krug’s base wines.

After a brainstorming session between Krug’s craftsmen and the sound experts, they suggested linking sound properties to correlating tasting notes, thus creating a sonic environment able to offer a multisensory experience in the new Family House in Reims. This approach allowed them to translate each unique wine into a unique soundscape based on its flavor profile.

Composer Roque Rivas was approached to create the ten soundscapes, representing ten sub-regions within Champagne that are represented in the final blend of Krug Grande Cuvée. The soundscapes reveal the most striking attributes of the wines, enabling participants to “taste” the sound.

A tailor-made immersive sound system was designed by IRCAM, in collaboration with the Amadeus company – French manufacturer of high-end sound reinforcement loudspeakers, studio monitors, and signal processing interfaces – to create a more fluid listening experience and to get the tasting and sound experiences to blend into a single experience. To design and realize this immersive tasting salon, IRCAM also collaborated with international architecture and interior agency AW². By joining forces, they were able to create a unique and innovative sound space.

A one-of-a-kind sound system was designed specifically for the room, made of two electroacoustic setups. The first is frontal and seamlessly integrated into the ‘Wall of 400 Wines’ that depicts the different wines auditioned each year to create a new Édition of Krug Grande Cuvée. It has 18 Amadeus PMX 4 coaxial speakers, spread regularly on three levels, along a 9-meter width. The second system, more immersive, is situated above the guests. It is composed of 8 speakers integrated into the ceiling plus 6 speakers developed specifically for Krug and surface-mounted on the walls, supplemented with two low-frequency speakers. Each of the 34 speakers in the system is amplified and can be controlled and processed independently.

Sound contents for this unique system are created and played with SPAT, IRCAM’s sound spatialization software. The frontal matrix included in the ‘400 Wines’ front wall offers creators and sound designers new spatialization possibilities vertically and allows them to create very ‘graphical’ sound scenes. Associated with the immersive system, it gives the sound system a rich vocabulary to create a parallel soundscape for the tasting experience.

Concurrently, an electro-acoustic development project was initiated, matching the technical needs of IRCAM and the aesthetic demands of the House of Krug. It resulted in a unique speaker system, produced in six pieces specifically designed by AW2 and engineered by Amadeus. These unique speakers are made of COR-TEN steel, cut and then laser welded. Their rust finish results from the rapid oxidation of the material, stopped by a chemical process, then ‘fixed’ with a transparent matt varnish.

As a genuine aesthetical, technical, and acoustical challenge, the development of these speakers was managed by designer Stéphanie Ledoux, associated with AW2 cabinet and Michel Deluc, Amadeus’ R&D Manager. Each bespoke speaker hosts a long-excursion coaxial transducer with a frequency response down to 60 Hz. Each transducer is hidden behind a laser-machined front panel with a ‘K’ logo, symbol of the Maison Krug.

Two speakers dedicated to low frequencies were developed as well, they are the Amadeus ML 12 K. They are equipped with a 12-inch (30cm) boomer drivers hidden behind a ‘grid’ directly machined in wood, with vertical thin lines or ‘blades’, alternating matter and empty space.

Two speakers dedicated to low frequencies were developed as well, they are the Amadeus ML 12 K. They are equipped with a 12-inch (30cm) boomer drivers hidden behind a ‘grid’ directly machined in wood, with vertical thin lines or ‘blades’, alternating matter and empty space. 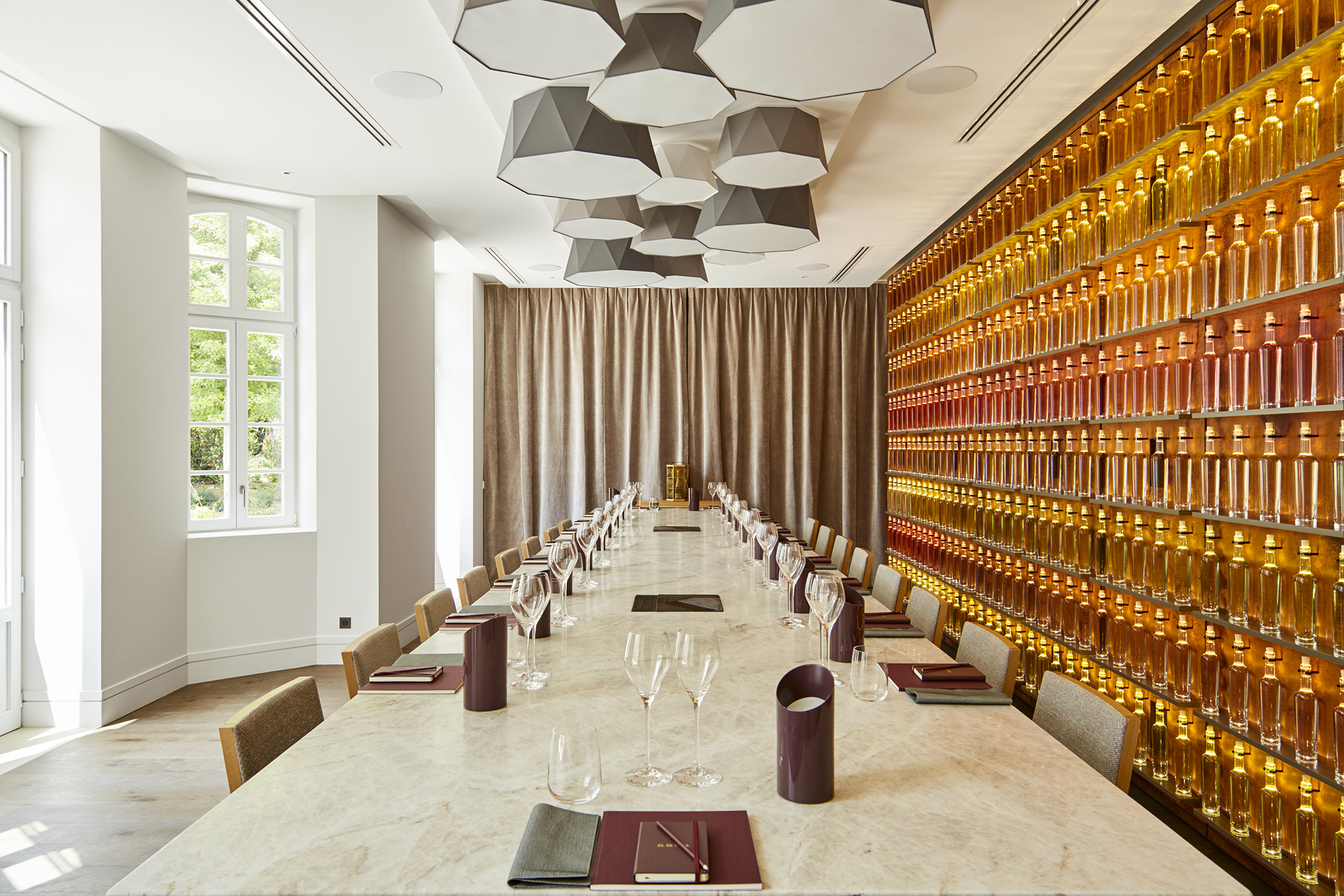